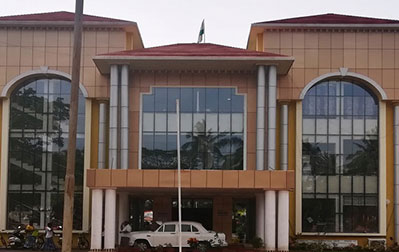 Bhadrak is one of the premier districts of Odisha with a rich heritage and history of its own. As per the legend, the district has derived its name from the Goddess Bhadrakali whose temple stands on the bank of the river Salandi. Bhadrak was a Sub-division of Baleswar district prior to its declaration as district vide Govt. of Odisha notification No. DRC -44/93-14218 Dated 27.03.1993; it came into existence on 01.04.1993. The district is bounded by Baleswar district on the North, Jajpur district & River Baitarani on the South, Kendujhar district on the West and Bay of Bengal &Kendrapara district on the East. The Bhadrak District covers an area of 2505 Square Kilometer. It lies between latitudes 20°43’ to 21°13’ north and 86°16’ to 87° east longitudes. The District has got only one sub division with same name, 7 Tahasils, 7 Blocks, 2 Municipalities, 2 NACs, 17 Police Stations, 218 Gram Panchayats and 1370 Villages. There are many historical places and monuments which reflects the past glory of the district. Among others, Baba Akhandalamani Temple on the bank of river Baitarani is the abode of lord Shiva. The artistic carving of the temple deserves special worth to the visitors. The density of population of the district is 601 per Sq. kilometer and decadal growth Rate of population (2001-2011) is 12.9. Agriculture is the main income of the district. But many people in the coastal area Dhamara of Chandabali Block to Padhuan of Basudevpur Block are depending upon the Fishing.

Launched in 08th March, 2001, Mission Shakti has brought a revolution in the field of SHG promotion and which has led to formation of around 10,000 WSHGs with the help of ICDS functionaries. The SHG network was strengthened further through TRIPTI and Odisha Livelihood Mission, which were implemented in the District in 2009 and 2014 respectively. For further inclusion of Women’s in the SHG network, Mission Shakti has formed 8,920 numbers of WSHG as on and after 01.04.2017. Now, 2, 51,654 numbers of women have been mobilized through 24,116 numbers of WSHGs in the District.

As Cabinet in its meeting on 29.05.2019 has approved the provisioning of services and procurement of goods relating to the Government department through WSHGs, WSHGs are involved in many income generating activities like Paddy Procurement, Pisciculture in GP Tank, Electric Meter Reading, Management of MDM, Stitching and supply of Pre-school Uniform to AWCs, Mushroom farming, Vegetable cultivation and Layer Farming in Deep Litter Systems etc. During Kharif Marketing Session 2019-20, 24 nos. of GPLFs and 3 nos. of WSHG had been procured Paddy in their respective GPs. 74 nos. of GP Tank for the FY 2018-19 & 82 nos. of GP Tank for the FY 2019-20 have been tagged to WSHGs for Pisciculture. In Chandbali Block WSHGs have been selected for Electric Meter Reading. 60 nos. of WSHGs from different Blocks have been selected for Layer Farming in Deep Litter System. Apart from the above activities, it is being planned to involve SHG/ SHG Federations in management of Mid-Day-Meal in Schools having student strength of 100 or above from FY 2020-21.

There are many WSHGs in District, who are doing exemplary livelihood activities in different sectors and able to multiply their incomes over the periods. In a significant achievement for the SHG fraternity of the District, one SHG namely “Jay MaaDurga” of Geltua GP under Bhadrak Block felicitated as best WSHG by W&CD and MS Deptt., Govt. of Odisha on the occasion of International Women’s Day-2019 celebrated on 08.03.2019 and received cash prize of Rs. 50,000/-.