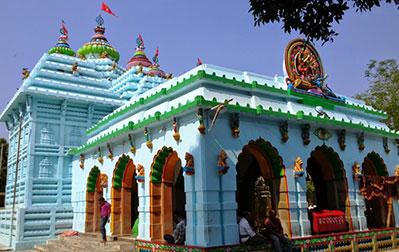 The district of Jagatsinghpur came into being on the 1st of April 1993 after being separated from the erstwhile Cuttack district. Nicknamed ‘Banikshetra’, it has a glorious heritage of culture, art, history and archaeology.

Geographically, Jagatsinghpur lies between 860 3′ E to 860 45′ East longitude and between 190 58′ to 200 23′ North latitude and at an elevation of 15 meters (49 feet) from sea level & is triangular in shape. It is the smallest district in the state covering an area of 1759 km2. The rivers Mahanadi, Alaka, Biluakhai, Hansua, Devi and Paika which pass through the district, and two main canals, Taladanda & Machhagaon, are major sources of irrigation. Jagatsinghpur enjoys a temperate climate and is prone to cyclonic rainfalls and storms during the monsoons.
The history of Jagatsinghpur is a confluence of impacts of the Hindu, Mughal, Maratha and British empires. Anciently called ‘Hariharapur’, name of Jagatsinghpur came into existence as a revenue village in the later 1700s either in Mughal or Maratha rule. Jagatsinghpur’s rich historical antiquities and archaeological marvels find expression in the form of temples, sculptures, images spread across the district. The district also has had a major role to play in India’s freedom struggle through participation of prominent freedom fighters in the Civil Disobedience movement and the Salt Satyagraha.

Jagatsinghpur is also well known as the cultural heart land of Odisha. Adikabi Sarala Das, a 15th-century poet and scholar, who hails from this region is considered as an originator of Odia literature. The District is also famous for theatre groups (Gananatya), which have now become the part of mainstream entertainment for people all over Odisha. The festivals of Jagatsinghpur, namely, the Kalinga Baliyatra, the Boitabandan Utsav at Paradeep and Chelitola highlight Odisha’s glorious maritime history.

Jagatsinghpur District has only one sub-division namely Jagatsinghpur, 8 Blocks, 8 Tahasils, 1320 villages, 198 Gram Panchayats and 13 Police stations. It has a population of 1,136,971 with a density of 682 (2011 Census). Jagatsinghpur tops the list in terms of male literacy and second in female literacy in the state and ranks better than the national average in literacy.
The economy of Jagatsinghpur is predominantly agrarian, with 70% of the total population depending upon agriculture and agro–based productions. A section of people is also engaged processing, manufacturing, repairing and fisheries industries. Major large-scale industries in the district include Paradeep Phosphates Limited, Paradeep Plastic Park Limited, IFFCO- Fertilizer Plant, Essar Steel’s Pellet plant, Indian Oil Corporation Limited (IOCL) Refinery. Paradip Port, a natural deep-water port which was built here in the 1960s is the only major port in the state and has now emerged as a major maritime gateway in the east coast.

The Women Self Help Group movement of the Government of Odisha, under the banner of Mission Shakti has taken 2,18,180 women (and counting) in Jagatsinghpur from all age groups, religious, cultural and socio-economic backgrounds under its fold through formation of 19, 437 WSHGs. Between 2001 and 2019, these women have been empowered individually, institutionally, socially and economically through various interventions in form of grants/ funds, financial inclusion, institution building, training and capacity building, and livelihoods development and management. Other agencies like Odisha Livelihoods Mission (OLM), Odisha Rural Development and Marketing Society (ORMAS), with similar goals have also contributed significantly towards women empowerment in the district. In contrast to traditional income generating activities like food products, farming/ agriculture, handicrafts, tailoring, toys, etc., the WSHGs today are venturing into new areas like manufacturing LED bulbs, producing sanitary napkins, running buses, electricity meter reading and bill collection, pisciculture, poultry farming, running PDS units and LPG gas cylinder supply agencies. About 700 WSHGs are engaged in several of the income generating activities in Jagatsinghpur and another 1100 are interested in taking up many of these activities. Several more are enrolled in different training and capacity building programmes after about 1400 newly formed WSHGs have been financially strengthened through Bank linkage. Maa Durga SHG (Lentil dumplings, Poppadum, Incense sticks, etc.), Maa Mangala SHG (Palm leaf products), and Bhagabati SHG (jute products) have been felicitated in the State level. About 300 WSHGs are presently involved in provisioning services of Government departments under a convergence programme of Mission Shakti with ten Government departments. The WSG movement in the district is steadfast and is steadily progressing towards achievement of goals set.