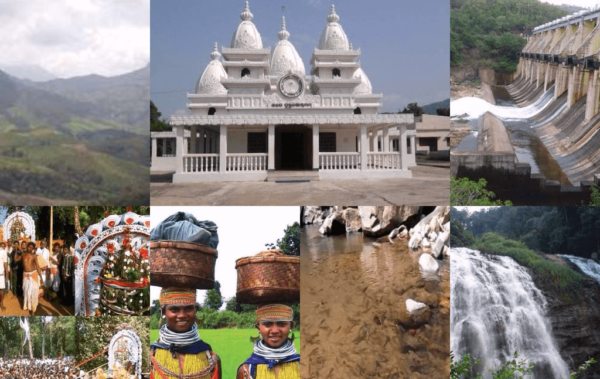 Malkangiri district is named after its headquarters town named Malkangiri. During formation of Odisha Province in 1936, Malkangiri was a “TALUK” of Nabarangpur sub-division of Koraput district of Odisha. In 1962, it was upgraded to a sub-division of Koraput District. At present Malkangiri got its identity as an Independent district due to reorganization of districts of Odisha as per a notification on 1st Oct 1992 and with effect from 2nd Oct 1992 covering an area of 5791 sq. km. It lies between 170 45’ N to 180 40’ N latitude and 810 10’ E to 820 E longitude of the district. The district is divided into two distinct physical divisions. The Eastern part is covered with steep ghats, platues & valleys, sparsely inhabited by primitive tribes, notable among who are Bondas, Koyas, Porajas & Didayis. The district is moderately literate, with the number of literate males far out numbering the number of literate females. The history of Malkangiri seems to be in no way less thrilling and adventurous than any other place of India. The land of dense inaccessible forests, small but beautiful rivers, undulating plateaus and splendorous rich tribal culture, Malkangiri has its history of human civilization enrooted to as long as 2500 years back. Prior to the modern civilization, many mythological episodes took place in and around Malkangiri. One ancient Shiva Temple now submerged in the Chitrakonda Reservoir was known as the second Lingaraj of Odisha. This famous Shiva Temple was visited by Sri Chaitanya Deva during his visit to Nandapur. Existence of a number of Shiva Temples in and around Malkangiri signifies the fact that the ancient Kings were Shaivists.

The culture of Malkangiri District is displayed by the song and dance programmes of its tribal people, the major portion of the district’s population. The chief tribes seen here are Bondas, Gadabas, Kondhs and Koyas.