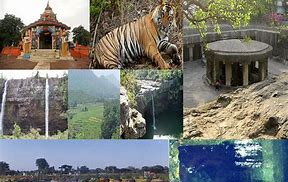 Nuapada district is located in the western part of Odisha. It lies between 200 N and 210 5’ latitude and 820 40’ E longitude. The boundaries of Nuapada extend in the north, west and south to Raipur District of Chattishgarh state and in the east to Bargarh, Balangir and Kalahandi districts of Odisha. This district is spread over an area of 3,852 sq km. The administrative headquarters of the district is located at Nuapada town. The district of Nuapada was a part of undivided Kalahandi district till early March 1993. For  administrative convenience, Kalahandi district was divided into two parts i.e. Kalahandi and Nuapada vide State Government Notification No. DRC-44/93/14218/R. dated 27 March 1993. Present Nuapada district comprises of one sub-division (Nuapada), five tahsils (Nuapada, Khariar, Komna, Boden and Sinapali) and five blocks (Khariar, Sinapalli, Boden, Nuapada and Komna).

The plains of Nuapada subdivision fringed by rugged hill ranges, stretch southward which belong to the main line of the Eastern Ghats and contains extensive plateaus of about 4000 ft (1200 m) in elevation with long tropical grass grown over them. It contains mineral deposits such as laterite, graphite and bauxite. The hill sides rising up precipitously from the plains are covered with dense Sal forests. There are other forest species such as Teak and Bamboo. All these are situated in the dry deciduous forest zone. Timber is by far the major forest product and Sal wood is a major constituent of these products. Other important woody tree species of Nuapada forests, are Bija, Asan and Bandhan. There are so many ancient monuments & heritage places such as Yogeswar Temple Patora, Dadhi Baman Temple, Buddhikomna Pataleswari Temple, Jogi Matha Risgaon, Patal Ganga Boden, Sunabeda Wildlife Sanctuary, Godhas & Beniadhas Waterfall, Saliha Smruti Stambha, Upka Ganga etc.

There are some other minor forest products of this region which include Kendu leaf, wild broom grass, Mahua flower, Mahua seed, Antia bark and Sabai grass. Timber, bamboo and Kendu leaf are major products exported to other states.